General
-Added Asha, the teleporting Komato assassin
-Added tumble tech input - while in tumble, hold shield and press jump to do a small uninterruptable and vulnerable jump (35 frames)
-SDI will now trigger on the first frame of hitlag if control stick is already held, secondary stick being held will override SDI direction
-Added 30fps to framelimit options
-Made the game slightly more lenient with frametime needed for a frame to be executed
-Activated results screen win quotes. Winning character says something quippy.
-Made CPUs check if a teammate is closer to an opponent and prioritize another opponent if they exist instead
-Made CPUs recovery logic prioritize safety zones better. Now they have significantly more success recovering on Mecha Santa's Fortress.
-Added Mecha Santa's Fortress to Arcade stages
-Added CPU DI and SDI options to training mode
-Replays can now be fast forwarded by holding the FFWD button (displayed in lower right corner during replay)
-Lives counter now uses an image of a heart instead of relying on text
-Rotated horizontal death blast by 90 degrees so that it is no longer viewed edge-on
-Fixed issue where rebounding animations had hitlag applied
-Fixed issue where attacks beating grabs would behave strangely. Now attacks properly beat grabs.
-Attack hit FX are now placed more accurately where attacks actually hit
-Fixed issue where stage collision would lag behind objects on moving platforms
-Fixed issue where pressing Start and retrieving the selection marker on the same frame on the Smack the Crystals character select, the game would load forever
-Fixed issue where Business Casual Man and Goddess of Explosions lost their animation at the end of their jump startup
-Fixed issue where characters would always face left after bouncing on the stage
-Fixed issue where countdown for timeouts would animate on pause screen
-Overhauled the clang values and hitbox interaction for all attacks. The minimum rebound time is now 25 frames. You can see a detailed explanation of the clang system and a list of all interacting hitboxes at the bottom of this changelog.


Masked Ruby
-Tweaked the animation of Dspecial
-Ruby's sword is now 10% longer except during Nspecial and Dspecial (which also makes it easier to sweetspot Fair, Bair and Uair)
-The last hit of Ustrong now always sends the opponent straight up (knockback angle stacking during hitstop is disabled)
-Nspecial now has an interacting hitbox with standard aerial priority that Rebounds on losing and tied priorities
-Changed Finisher DI from 1.0 to 0.5


Ultra Fishbunjin 3000
-Now has immunity against very slight knockback during the Jump and Fall states in addition to Idle, Crouch, and Walk/Run
-Fishbunjin's hands now catch fire when the grabbed opponent has 50 damage or more, signifying the point where Dthrow will travel forwards
-Edgeroll now travels faster near the start of the move, so Fishbunjin becomes vulnerable further onto the stage
-Can now clutch reverse aerial Dspecial
-Changed aerial Dspecial landing lag from 20 to 25
-Changed aerial Dspecial shieldstun from 1.0 to 0.5
-Changed Uthrow total length from 50 to 48 frames


Princess Remedy
-Changed Bair landing lag before the hitbox comes out from 5 to 3 frames, to make it consistent with other aerials
-Changed Fthrow hitstop and selfstop from 0.0 to 1.0


Business Casual Man
-Now loses money during Taunt when he's grabbed, and not just when he's hit
-Fixed Fstrong having infinite priority against other attacks on the hitbox at the center of his body
-Changed Utilt hitstun from 1.0 to 0.95
-Changed Utilt total length from 24 to 22 frames
-Changed Dspecial superarmor start frame from 6 to 4


Ittle Dew:
Ittle's Fair and Uair landing lag was slightly increased. Her Ustrong now more reliably connects with the second hit. Dthrow deals less damage than before but has the same knockback; it dealt a bit too much damage relative to the more powerful characters.


Masked Ruby:
Ruby's sword is now 10% longer except during Nspecial and Dspecial, which makes it easer to sweetspot Fair, Bair and Uair. The last hit of his Ustrong now always sends the opponent straight up. Nspecial can clank with other moves. His Finisher has become deadlier due to reduced DI.


Jenny Fox:
Jenny's Finisher no longer KO's opponents at zero damage. Her Nspecial axes have very slightly more hitstun. Her Fspecial axes travel further, hit opponents more often and no longer continue travelling up/down after completing their initial arc. Jenny can now hold either the Attack or Clutch button to delay her Fair instead of just Clutch, and she can jump out of her Dtilt slightly earlier than before.


Ultra Fishbunjin 3000:
Fishbunjin can now clutch reverse Aerial Dspecial, but it also has slightly more landing lag and less shieldstun so it won't be as safe on block. He now has immunity against very slight knockback (Ittle's bombs and Jenny's Fspecial axes) during the Jump and Fall states in addition to Idle, Crouch, and Walk/Run. He can now act out of his Uthrow slightly faster.


Princess Remedy:
Her landing lag before Bair's hitbox comes out was reduced, and Fthrow now has hitstop which is just a cosmetic change.


Business Casual Man:
Now loses money during Taunt when he's grabbed, and not just when he's hit. His Utilt hitstun was lowered due to its infinite combo potential against Asha, but its endlag was lowered to compensate. His Dspecial superarmor comes out faster than before.


Goddess of Explosions:
Goddess' Jab and Nair now attack in more rapid succession. She deals slightly less damage with Ftilt, Fair and Nspecial, but their knockback remains the same. Her Fair and Dair no longer bounce away when they hit a blocking or invincible opponent. Her Utilt hitstun was lowered due to its infinite combo potential against Asha, but her Finisher and Fthrow are deadlier due to reduced DI. 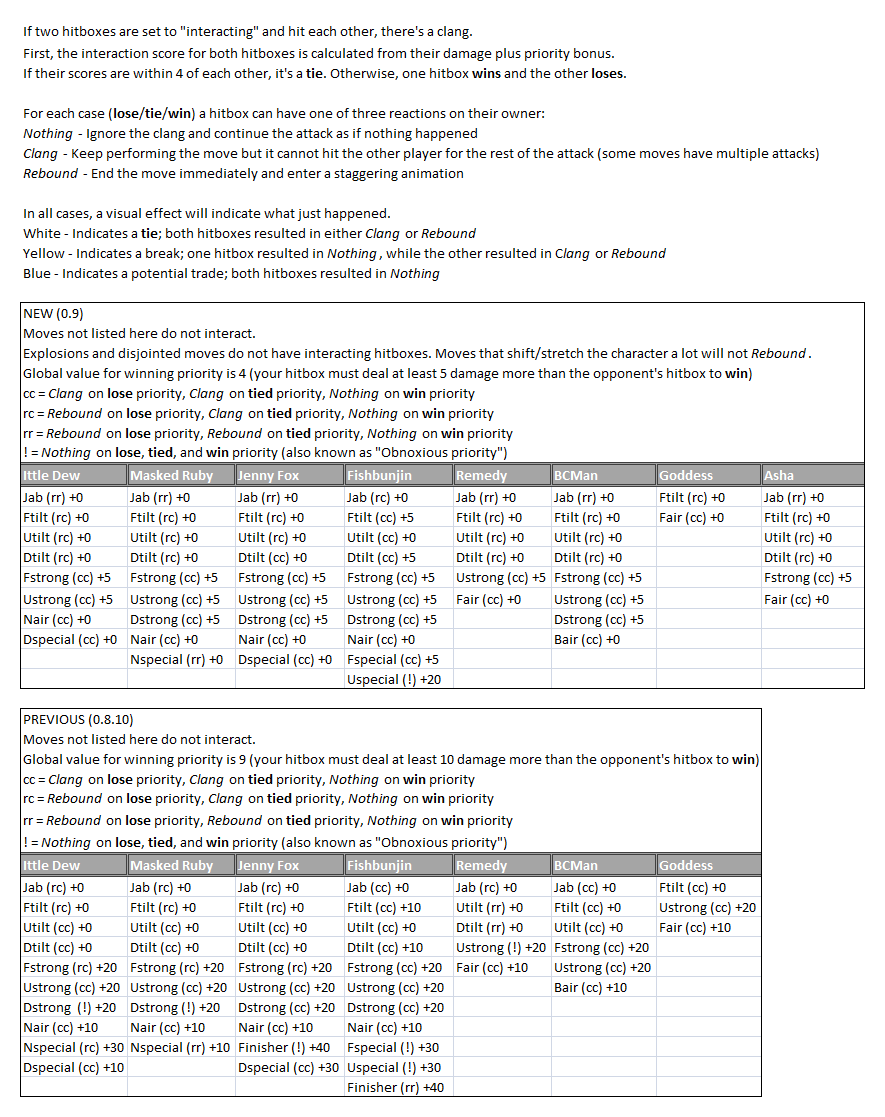