The game now features Story modes for all the characters and many other improvements! 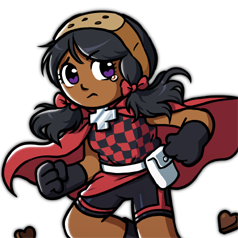 Bonus! Frallan joins the game for 1.0!

A boisterous Saturnian healing school graduate who lives for adventure and romance, going wherever her whims take her. But mostly where Princess Remedy goes.

Unlike Remedy, Frallan relies on her speed and strength to overwhelm her opponents. Some of her moves are boosted by explosive pills that need to be manually reloaded, and she can quickly heal her allies in a team battle.