Asha and Ranked Online is here!

We're so happy to announce that we're now at 0.9 and have a full cast of the original Slap City Eight, and ranked online! 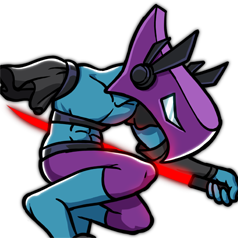 A lightning-fast Assassin in the Komato Imperial Army, Asha was quite literally bred for battle.

Asha's temper and recklessness has earned him plenty of combat experience - if not a certain level of infamy - but his light frame makes him incredibly weak once his opponent catches up to him. While Asha's moves are relatively slow, his local teleportation ability lets him confuse his enemies before going in for the strike. He recovers teleport charges while on the ground, but also while receiving and inflicting damage.

You can now play online matches and earn ranks! They come in tiers of 10 ranks, and once you reach a new tier you can never be demoted.

We're now working full steam on the 1.0 release which will among other things bring a full Single Player Adventure mode! Stay tuned!